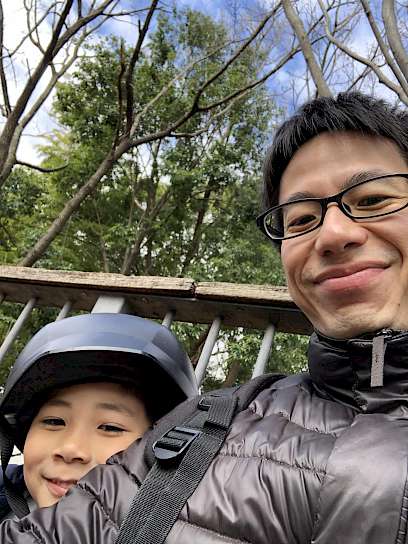 1. What is the story behind the name Kento? Where does he live, what does he do, what music does he listen to, does he have a hobby?

That's a lovely question. :) Let me narrate the story. Kento lives in Yokohama, Japan, being an English teacher that teaches English to high school students. He truly loves music! Kento plays the guitar and that's his hobby; he's a music junkie, who is hungrily looking for any kind of music that is beautiful.

2. Could you tell us more about your path before LU? How did the search begin, what was wrong? What do you wish you knew before starting out as a seeker?

The search began when I was 20 (as I remember ...), when I started job hunting; that was a tough time for me, as I was constantly searching for the meaning of life and something I wanted to do according to that "meaning."

I couldn't find any single clue about it. I used to feel desperate and chronically fatigued, which eventually led me to a sudden symptom of hyperventilation. I thought I was dying! Then, tension and anxiety filled my life for quite a long period of life.

I started to search for ways to dissipate this anxiety, and some techniques or teachings seemed to have given me a temporary relief, although that relief didn't last for long.

I kept searching. In 2010, while I was staying in Northern Ireland, I met some local people who were offering a small zen sitting meeting. Once or twice a week they met to sit in silence, in a room they rented and transformed into a zendo (zen sitting dojo). That was my first experience of zazen (zen sitting), and I loved it.

After coming back to Japan, I continued to feel inclined into zen, and participated in a retreat held at Hosshin-ji temple in Fukui. I started to become aware of something people called "kensho," which literally means "seeing one's true nature." I sat, sat and sat, but kensho seemed to be far away from me. Later I came to regularly sit at a temple in Shinagawa, Tokyo; a temple called Toshoji ( http://www.toshoji.com ), where I still sit at. I came across LU around the same time. And after I had a dialogue with Delma in LU and "crashed the gate", the abbott at the temple (after careful examination through one-on-one interview) admitted that I had "passed the first gate," which meant that "kensho" had happened.

I don't think anything was wrong about the above path I had taken. Everything I did during the search is felt to have been one step forward towards LU and Toshoji. Well, if I had known these two from the beginning, that must have been a far easier way! I hope this wasn't too long

3. A few words about your thread? Do you remember what beliefs you came with and what you found out at the end?

One of the major beliefs of mine was that there should be something there to be aware of the things. Looking back, my strongest belief about a separate, concrete self was that there was "something" aware of things. With Delma's straightforward pointers, that belief was deconstructed, and that resulted in my gatecrashing.

3+1 - It seems easy and natural for you to merge zazen with the LU inquiry, but for many this would be a contradiction. What advice would you give to those who have been practising for 10, 20 or even more years, following the established traditional methods or teachers without result?

As a practical advice, I would tell them to be with a teacher who has truly seen through the illusion. As far as I know, a lot of the teachers teach satori (self realization) without having an experiential knowledge about it. It is difficult to distinguish between those who have experiential knowledge and not, and I strongly feel a need for a kind of "guide" to introduce a seeker to a person who is authentic, in a sense that this person knows what he's talking about from actual experience and has shared it with someone who had had the same realization.

4. What would you say the Liberation Unleashed process is exactly? What is it that happens in all these thousands of conversations?

It is a process of unknowing everything about "me" and finding out what there is without "me." As a result, along with a certain amazement and gentle relief, one, from the bottom of his / her heart, knows that everything s/he had thought to be important regarding himself wasn't that important - that life has been, is, and will go on as it is, without any need of thought and image of a separate personality.

5. Some may say that seeing that there is no separate self is a nihilistic approach to life, that it is denying personal experience. What would you say about that?

It depends on what that person means by "denying personal experience" or "nihilistic". One thing I could say is, seeing that there is no separate self is not an approach to life. That there is no such an entity is a fact, and what people think about it doesn't matter at all. And you either see it or not; it's not that one has to see it, nor am I saying that seeing it or not seeing it is good or bad.

6. How are your relationships with friends and family now that you are approaching life with a deeper view? Have things changed at all? And what would you say is the biggest difference in how you lived before this realization and how you live now?

I'm not sure if I'm approaching life in a certain way, as I wrote in the answer to the previous question. The biggest difference is that, now I don't really care about what / how I am, or what / how I should be. A big amount of energy wasted on these ideas can be used instead for enjoying life, and I'm really happy about it.

7. For how long have you been guiding in LU and how many threads have you guided?

I have been guiding for almost five years. I haven't counted the total number of threads, but I checked the number of successful conversations, and it was 28.

Oh well, because I'm an English teacher and need no more teaching job! Just kidding ... Well, I don't guide instead of teaching; I do it because I simply love doing it.

In LU and guiding process, there is still a possibility for similar things to happen to guides and clients, but for me it feels the possibility is far lower than that of a teacher - student relationship. Regarding this, I love what Greg Goode wrote ... it goes like this: "The age of the guru is over. This is the age of the friend." I feel this puts well the spirit of LU; we are friends that are together trying to see what is true.

9. Could you tell something to those who have fear and postpone their exploration in LU?

Just give it a try! It won't hurt you. At the worst case nothing will happen, and then you can see LU didn't suit you, and you can step forward. Even if nothing seemed to happen, you would still find a dialogue in LU to be a good way to see by yourself how many beliefs there are around the notion of who you are (including the popular notion "you are awareness").

10. What are the most common expectations and misconceptions you have to deal with when guiding?

It seems some people think that there is something called "no-self" that can fix the problems about their daily lives. With that mindset, it is possible that the concept of "no-self" is used to escape from one's actual problems in everyday life, which is, in fact, of utmost importance. One could easily say "I have a problem, but really, I know that there is no I, so I don't have a problem" which obviously doesn't lead anywhere. As silly as it may sound, quite a lot of people write in a similar way during the course of conversation.

Recently, in the dialogue, I feel it helpful to elucidate whether seeing through the illusion is his/her primary goal (i.e. an end in itself) or s/he has other goals which gating is a means to that end. In the latter case, it is desirable to have a look at that "end" (which is oftentimes a reverse side of one's own problems) and relate the guiding process to it. I also notice that some people tend to be heavily influenced by the notion of "I am awareness."

11. What would you be your advice for those who completed LU process and had the realisation?

Be true to yourself, don't delude life with the thought that you have realized something.

If problems arise, look in the way you did with your guide, and if you're in trouble, consult it with any guide in LU. Experiment with the ways you can look at the things you feel stuck at, and be passionate to keep learning from life itself.

I want to express my huge gratitude to all my friends in LU, especially Delma, who has kindly guided me in times of great desperation for truth.

Look at a cup or glass on your table. Is it truer to say that it is “a cup,” or a “my cup”? Where exactly does “a cup” become a “my cup”? What is the mechanism?