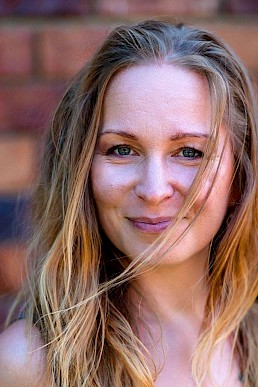 What is the story behind the name Vivien? Where does she live, what does she do, what music does she listen to, does she have a hobby?

I grew up in Hungary, but I live in sunny Brisbane, Australia. I used to be a psychologist, but nowadays I do guiding full-time. I like to spend time in nature, especially at the sea. I’m also fascinated by trees and their beauty. I’m fortunate enough to live close to nature with good weather most of the time. I like beatless soft ambient music with interesting meditative-like sounds, mostly without vocals. But I enjoy silence even more. I used to make hand-made jewellery with beautiful colorful Swarovski crystals.

Could you tell us more about your path before LU? How did the search begin, what was wrong?

My search probably started in my late teenage years. I’ve always been fascinated by both the human psyche and the functioning of the physical body. Especially how the human mind works, why we behave in the way we do, why it’s so difficult to change our habits, why we feel what we feel, and why we have so little control (if any) over our emotions.

I had a difficult childhood, which resulted in some painful coping mechanisms, and since my teenage years I was constantly searching for ways to change them. This search largely contributed to wanting to obtain a degree in psychology. So I spent almost a decade on trying to heal my wounded little girl inside with all sorts of psychological methods. This period was very useful, but it couldn’t penetrate deep enough, to the essence of human dissatisfaction and suffering, since it was all about a self, who needed to be different in order to participate in life with less dissatisfaction, pain and fear.

I was around 30 and I was in a shopping mall, when suddenly I woke up from the incessant stream of thoughts, and got very aware that behind (or under) all that thinking, there was a full living world of experiencing. Sounds, colors, shapes, all sensations, everything was in constant flux. These were all there all along, but I could never really notice them before, since I was so immersed in the internal conversations, replaying past events and fantasizing about how I could have replied or behaved differently; and planning and fantasizing about future scenarios when I was different, like a better version of myself.

This was a fleeting realization, but it left a deep recognition that there is a different way to live than constantly being immersed in the artificial thinking-world.

A few words about your thread? Do you remember what beliefs you came with and what you found out at the end?

I had the belief that upon seeing that there is no inherent self, I was going to die. I mean the body was going to stay alive, but me, whatever I was, was going to cease to exist. I also believed that somehow I could feel certain people’s peace, like feeling the peace that emanated through the TV screen when I was watching Eckhart Tolle speak. During the investigation, I realized that the peace I felt wasn’t coming from Eckhart Tolle on the screen, but it was within me. I just projected my peace onto him.

Some may say that seeing that there is no separate self is a nihilistic approach to life, that it is denying personal experience. What would you say about that?

I spent a few days in a nihilistic state, and it definitely was not fun. But seeing that there is no inherent separate self governing life is far from nihilism. Actually, it’s quite the opposite. Life gets fuller, more free and beautifully meaningless. It’s actually quite freeing that there is no purpose to life, there is nothing to become, nothing to achieve, since everything is as it is in this moment, and cannot be any other way.

When nihilistic thoughts show up, it’s often because there have been some glimpses into seeing reality as it is, seeing that there is no self-directed autonomous self, and everything is just happening on its own; but these glimpses haven’t penetrated deep enough to dissolve the belief in the separate self fully. So these moments of seeing are interpreted through the veil of the notion of me, what this means to me, and what it tells me about my life and my purpose in life.

So if anybody gets into this state, it could be very useful to investigate who it is that is having these thoughts and finding life meaningless or pointless. Look for the self who suffers from it.

How are your relationships with friends and family now that you are approaching life with a deeper view? Have things changed at all? And what would you say is the biggest difference in how you lived before this realization and how you live now?

Before this realization, I perceived myself like an empty glass, and I needed others (especially the loved ones) to fill this glass with love, but not just to fill it, but constantly re-fill it, since at the bottom of the glass there was a hole, and the contents were gradually seeping away. Now, there is no empty glass anymore, there is no glass at all. Probably the biggest change is that I stopped demanding love in my close relationships, since there is no lack of love inside anymore.

But I don’t want to give the impression that by signing up to LU and having a guided conversation will fix our emotions and our perceived lack of love. Far from it. My empty glass dissolved not simply because the illusionary nature of the self had been realized, but because the lots of additional emotional work I had been doing both before and after the realization. And I am not implying either that there are no more conditionings and patterns to dissolve. This is a long process. But investigating emotions is usually easier after seeing through the self and some other related beliefs.

For how long have you been guiding in LU and how many threads have you guided?

I started guiding 6 years ago, with a break in the middle. I’ve been having conversations with about 150 clients, 64 of which had the realization. Many clients just drop away. Some of them are not committed enough, some believe that this will be just a one-on-one teaching format, and lose interest when they realize that they have to do the work. Some are so identified with their intellect that they simply cannot find the way to get out of the comfort of their own thoughts, and investigate reality as it is, ‘before’ or ‘under’ conceptualization.

Why a guide and not a teacher?

Teaching is intellectual. It’s just transmitting second-hand knowledge. It’s no different than going to school and memorizing the material. But this cannot be taught; it can only be seen in one’s own immediate experience, here now, in this very moment.

Could you tell something to those who have fear and postpone their exploration in LU?

Fear is always based on fantasy. We hear stories about other’s experiences, and based on our beliefs we interpreted those and build up an idea, an imagination how seeing that there is no separate self would be like and feel like. And sometimes these fantasies are about negative consequences of the realization.

So, in essence, there isn’t much difference between expectations and fears. The former is about fantasies of positive and pleasant consequences, and the latter about negative ones.

But in both cases, these are just fantasies. But if we don’t see these for what they are — just thoughts floating by, which are not of our making — but rather we take these fantasies seriously, then they can become hindrances to start an investigation or going further and deeper.

But the truth is that we cannot know in advance how it will be. Why? Because all expectations come on behalf of a separate self, who is always in a search for peace, happiness, lack of fear and suffering. We simply cannot imagine it, since we cannot step outside from the separate self’s perspective. We can only imagine it within the ‘dream’ of me. The illusionary me is simply unable to imagine how it would be if it were discovered to be just a fictional character and not a reality. It can only imagine what it wants for itself.

What are the most common expectations and misconceptions you have to deal with when guiding?

The most common expectations are about self-improvement. That by doing the inquiry somehow I will change; I will be a better person; I will be more compassionate, more loving; and most importantly my inner world of emotions will dramatically change, and there won’t be more unpleasant sensations and emotions, only the pleasant ones will remain. It's a quite common expectation to get out of the ordinary human condition, somehow transcend it, and abide in a state of bliss, happiness and constant peace.

But these are just desires and fantasies on behalf of the separate self, thinking that by getting rid of half of the human emotions (the unpleasant ones), my life will be better, and I will be finally free. But awakening is not about not having half of the human emotions. Freedom doesn’t come from abandoning the full spectrum of emotions, rather it’s coming from encompassing all emotions, feeling them all freely. Freedom is feeling freely without the need to run away from our humanness.

Another common expectation is that I will identify myself as awareness or consciousness, and thus I become a passive witness to whatever is happening, which leaves a room for the imaginary self to be something real, but untouched by the ‘harsh reality of life’. Since it just observes what’s happening, but is never touched by anything, not even by death. So this idea is very attractive… since I can live on forever… I will never die… I can never be hurt… I am always pure and untouched.

So instead of discovering that there is no separation, this idea broadens the imagined gap between me and not-me, and thus making life dull and distant.

What would be your advice for those who completed the LU process and had the realisation?

Don’t stop looking. Seeing through the separate self is the beginning, not the end. And probably there is no finite end of awakening. At the beginning, there could be flip-flopping (seeing it and not seeing it), but with time and further investigations, there is a stabilization with no more flip-flopping and also deepening of seeing, and a gradual falling away of habitual patterns and conditionings.

Although the realization is not as magnificent and blissful than some imagine it, but much more simple and mundane, it’s really worthwhile to investigate what actually is, since seeing that there is no self-governed, inherent, autonomous separate self is the first (but very significant step) towards the end of human suffering and living a more content life.

For some people, this process can be really intense. Don’t fight it, allow it. Go with it. Let it rip. Face it. Ask the question, is it true that there is no separate self whatsoever in reality? Let the doubt in. Ask for the truth to be revealed.