Where Is The “I”? Where does it come from?

One of the most powerful approaches for awakening is doing what is called self-inquiry. This simple, “natural”, approach has occurred to many people in many cultures over time. These are “obvious” questions virtually everyone has encountered; “Who am I?”, “Where am I?”, “What am I?” etc. Often we just turn away puzzled, with no guidance on the approach or understanding to enable us to move forward. Is there anything we can gain from current cognitive neuroscience investigations with the latest tools and technology to help us work with these questions?

One of the most highly-regarded current neuroscientists is Anthony Damasio. One of his categorizations of the “self” is as three different functional parts, “proto self”, “core self”, and “autobiographical self”(1).

The “proto self” is identified as those parts of the brain that take care of physical functions such as metabolism, body temperature and daily/circadian rhythms. Those functions are found to be performed in the brain stem and hypothalamus.

The “core self” is identified as those parts of the brain that are responsible for functions such as visceral activities, processing emotions, plans for actions and issuing commands. Those functions are found to be performed in the amygdala, interbrain, medial and dorsolateral prefrontal cortex regions.

The “autobiographical self” is identified as those parts of the brain that are responsible for functions such as speech, linguistics and memory. Those functions are performed in the hippocampus, Broca’s area, parts of the prefrontal cortex, ventral medial prefrontal cortex, cingulate cortex, premotor cortex, insular cortex, and somatosensory cortex.(2) Others include the parietotemporal cortex, the precuneus, and the temporal lobes. (3)

To make this a little more understandable for those who aren’t familiar with neuroanatomy, the schematic below shows roughly where some of those areas are. Keep in mind that some of these areas are in the interior of the brain. 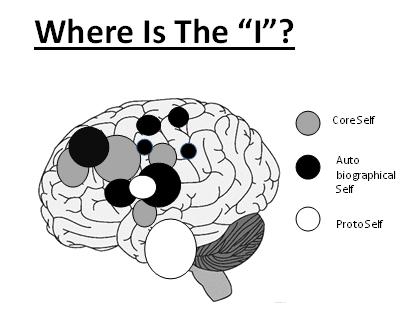 The point of all of this is to show that science has not been able to find any “single and permanent place” for anything like a central controller, or “I”. The “self” or “I” is found only as several different places where different functions occur. When those functions aren’t being actively performed, there isn’t anything “active” really there – just currently inactive portions of the brain.

This perception of regions being activated only for functional usage has been confirmed in several research studies, even for those regions previously suspected of being the most likely sites of an “I”. Eleven different regions/centers were found to respond to different “selfing/I-ing” functions, in different arrangements and networks. There were even “I and other” and “I in time” subnetworks identified which were “on” or “off” depending on the situation. (3)

The “I” has also clearly been identified as associated, perhaps even “created” by memory. Where does memory reside in the brain? Perhaps that is where the “I” is.

Again, contemporary cognitive neuroscience has some useful insights. The hippocampus is normally considered to be where short-term memory is organized, managed and retrieved. If one looks at short-term memory retrieval in progress, a schematic of what it typically looks like if an fMRI is imposed on the brain is shown below with the hippocampus highlighted. The memory storage sites are shown as circles when in actuality they are less regularly shaped. (4) 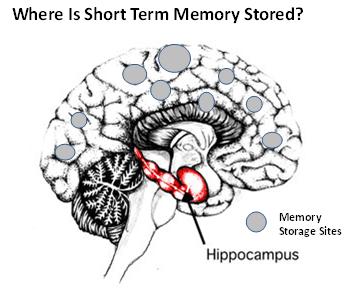 If the “I” is located where memories are storied, and memory is broadly distributed all over the brain, there is no single memory site, or location, where the “I” resides. So if one inquires into the question “Where am I?”, one would have to answer that “I am all over the place in different places at different times depending on what memories are involved and what functions are being performed”.

If the inquiry into the nature of the “I” goes further, most folk certainly believe that the conscious “I” is at least responsible for solutions being generated to all sorts of problems, simple and complex and where action is subsequently initiated.

Looking first at where solutions are generated to relatively complex problems, contemporary cognitive neuroscience has done some extensive investigation. Two recent papers looked in detail at solving such problems (5)(6). A problem was framed which required non-linear logic, i.e. A > B > C > 3 > 4 > D, for its solution. With two of the most powerful current tools in cognitive neuroscience, electroencephalography (EEG) and functional Magnetic Resonance Imaging (fMRI), they looked at brains during the process of solving this problem.

They discovered that in every case they could identify by activity in the right frontal cortex that the problem had been solved up to 8 seconds before the “I” was made aware that it had been solved and would subsequently announce, proudly, that it was successful, even though it had been completely “out of the loop” for the process.

The normal “I”/working memory/ego which believes that it solves problems is increasingly looked at as comprising something called the secondary or symbolic consciousness. This working memory/symbolic consciousness has the capability of handling no more than 7 +/- 2 items at the same time, whether they are symbols, colors, unassociated numbers, letters, etc. This is found to be true across virtually all languages, cultures and countries. This secondary/symbolic consciousness is relatively recent, evolutionarily speaking, probably only 30,000 to 100,000 years old, in its development and would be roughly equivalent to the random access memory (RAM) in a personal computer. It is responsible for largely serial (one thing being done at a time) processing, has relatively low processing capability/bandwidth, takes credit for everything that is done, and is the “voice in your head”. As it is the most obvious consciousness, it is often assumed to be the only consciousness. It is probably found in its fullest manifestation only in humans.

On the other hand, there is “beneath” this secondary or symbolic consciousness, something called the “primary consciousness”, which is nominally

unconscious/non-conscious and is generally not directly accessible except through the secondary/symbolic consciousness. This primary consciousness, which has been under development for millions of years, is comprised of roughly 100,000,000,000 neurons and trillions of interconnections. It is arranged as something like massively parallel (many things being done at a time) processors with great bandwidth/capacity and enormous hard drive storage capacity. This primary consciousness is the problem solver, the creative engine and the long term memory region. It is likely found in all primates and many other animals. It is the consciousness that does most of the work. As it is difficult to report the content of this consciousness without the symbolic or secondary consciousness, it is often “overlooked”. It is responsible for art, music, and intuitive, spatial and concrete results.(7)

The relative sizes and comparison of functionalities is shown below: 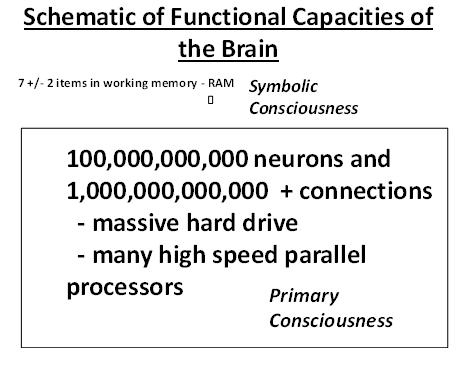 processor and storage capability/primary consciousness? Wouldn’t it have been better if we were able to run 15 programs at the same time?

Yes, until we realize that this development is relatively recent, evolutionarily. What would happen if we were running 15 programs at the same time and a tiger or a runaway elephant appeared? We might be eaten or crushed before we even realized that there was a problem as the focus of our attention was elsewhere. Running the main critical programs “off line” would be a superior survival strategy as it would allow us to be aware of our immediate situation, whether it was a bus, or a tiger or elephant bearing down on us.

The apparent “I” construct then, located in the symbolic or secondary consciousness, is capable of only simple calculations and reasoning, taking credit for activities and functions being carried out of which it is blithely unaware and constantly being the voice in the head talking about it to itself. It is also located not in one place, but is located “all over the place” as different functions and memory sites for recall are carried out in some part of the brain which uses the functional region for a short time and then moves on to other activities and locales as situations change.

1. “The Feeling of What Happens: Body and Emotion in the Making of Consciousness”, Damasio, Antonio, Harvest Books, 2000.