The most important thing is that this is not the end of the road. It’s the first step of an awakened, authentic life. While the belief in a separate and real “you” may be gone, chances are, a big part of the ego-based structure built on top of that belief is still in place. How big, only you can know. It is likely that at some point doubts will come up, reactions that may be considered “not useful” will happen, and (possibly deep) negativity will arise. The important thing here is that… More all these things used to cling to, and be fueled through, the idea of self, which is now seen as an illusion. So whenever thoughts or emotions come up that are judged to be negative, don’t avoid, don’t fight, don’t argue. Just stay with them, and watch them happen and unfold. It’s not personal, so it has nowhere to stick to. This kind of cleanup is obviously not a pleasant process, but you’ll likely realize that it actually works. All you have to do is take your hands off the steering wheel and let things burn when they are set on fire. 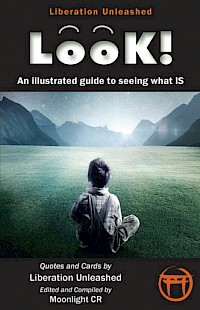 My boyfriend emails me this link to Liberation Unleashed. He’s always sending me stuff like this. Sometimes I ignore it…we’ve been in this seeking business a long time. Later when I ask, he doesn’t remember how he came across it. So I’m looking at this page and two words light up.… More